Born on December 10, 1936 in Puchaly, Poland, to Adam Remigiusz Grocholski and Barbara Swiatopelk-Czetwertynska, Wlodzimierz was the eighth of ten brothers and sisters. His family was categorically at odds with the Nazis and later with the Communists, the two occupying aggressors in Poland during the 20th century. 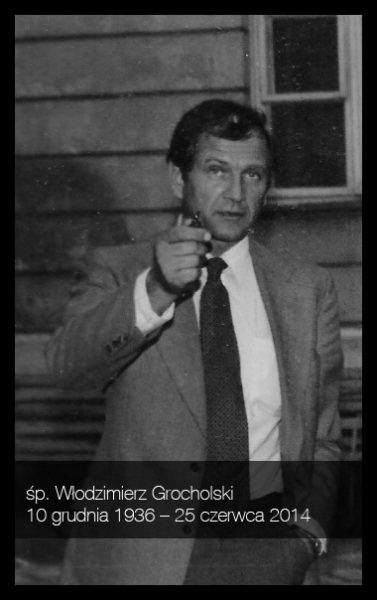 Wlodzimierz began working in film production, his first “love” and interest, in Lodz, Poland. He was a man of all trades, considered by many a true Renaissance Man. In1967 he left for the United States to be reunited with his fiancée Magdalena. They married in Paris, France and settled in Miami, Florida. There in 1972, Wlodzimierz was hired as Executive Director of the American Institute of Polish Culture in Miami. In this capacity, he worked to promote Polish culture and heritage in the United States and continued to do so throughout his life, including the introduction of the Mazowsze Polish Folk Song and Dance Ensemble and one of the oldest Yiddish theater groups, the Esther Rachel Kaminska State Jewish Theater of Warsaw. In the 1980s Wlodzimierz became actively involved in efforts to support Poland’s Solidarnosc movement, which would lead to the eventual fall of Communism. An exceptionally creative mind, Wlodzimierz would engage in numerous ventures over the years. In the mid-90s he patented a dehydration system, a technology for drying fruits naturally, a process that has become a staple for major firms in the food industry.

A man of deep faith and strong convictions, Wlodzimierz was unrelenting in defending his values, yet was equally persistent in his generosity. His home was always open to friends and strangers alike, whom he helped in miraculous ways at times. None were left unaffected by his extraordinary charm and unbeatable wit and intellect. He loved wildlife, and had been known to rescue and domesticate a variety of animals from doves to alligators. His demeanor was often compared to that of James Bond, and at times to Fred Astaire, his tricks to that of Houdini, yet no comparison could possibly begin to define this man who was absolutely unique in every way.

An indefatigable lover of life, Wlodzimierz courageously struggled against brain cancer for nearly a year, with vigilant support from his closest family. Wlodzimierz is survived by his wife, Magdalena, his children Barbara, Adam, Anna, Jas and Gabriel, and his grandchildren Izabella, Maximillian, Sophia, Gabriella and Niko.